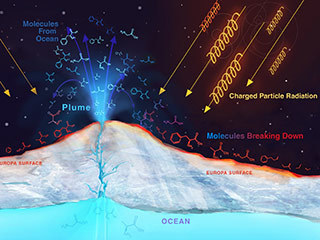 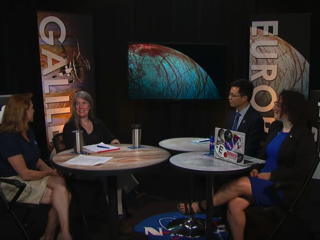 This animation demonstrates how deformation in the icy surface of Europa could transport subsurface ocean water to the moon’s surface.

This is just one of several simulated behaviors reported in a new study performed by scientists at NASA’s Jet Propulsion Laboratory. The study focused on linear features called “bands” and “groove lanes” found on Jupiter’s moons Europa and Ganymede. Scientists have used the same numerical model to solve mysteries about motion in Earth’s crust.

The animation is a two-dimensional simulation of a possible cross-section of a band running through Europa’s ice shell. At the extreme bottom is Europa’s ocean, and the thick white line across the top represents the moon’s surface ice. The midsection is the bulk of Europa’s ice shell, with warmer colors (red, orange, yellow) representing stronger, more rigid ice. Depth is marked on the left side of the animation while numbers on the bottom measure distance from the center of the band feature on Europa’s surface. Bands on Europa and Ganymede are typically tens of miles wide and hundreds of miles long. Numbers at the top mark the passage of time in thousands of years.

As the animation runs forward, the ice shell is deformed by gravitational interactions with Jupiter. The cold, brittle ice at the surface gets pulled apart. At the same time, faults in the upper ice form, heal, and re-form (visible as diagonal yellow, green and blue lines in the upper center of the animation). The churning material that quickly fills the bottom half of the view is a collection of tiny white dots representing bits of Europa’s ocean that have been frozen into the bottom of Europa’s ice shell (i.e. where the liquid ocean is in contact with the frozen shell).

In the paper, the scientists describe it as “fossil” ocean material because the bits of ocean trapped in Europa’s ice shell spend many hundreds of thousands, if not millions, of years being carried to the surface. In other words, by the time the ocean material reaches Europa’s surface where it can be analyzed by a passing spacecraft, it no longer serves as a sample of Europa’s ocean as it is in the present. Instead, the spacecraft would actually be studying Europa’s ocean as it was a million or more years ago. Hence, it is fossil ocean material.

NASA’s Europa Clipper spacecraft is intended to launch in the early 2020s. The spacecraft will then orbit Jupiter and become the first spacecraft to study Europa exclusively, including the composition of the moon’s surface material. The mission will likely be able to test the model simulated above by using ice-penetrating radar to probe the moon’s bands. If Europa indeed behaves the way the simulation suggests, it might carry ocean material to the moon’s surface, where Europa Clipper would analyze it remotely using the spacecraft’s infrared and ultraviolet instruments, among others. Scientists could then study the material’s composition to consider whether Europa’s ocean might be hospitable for some form of life.

Video (.mp4)
53.4 MB
video/mp4
Download
In this movie Europa is seen in a cutaway view through two cycles of its 3.5 day orbit about the giant planet Jupiter.

Europa Tide Movie
This image reveals a cutaway view of the possible internal structure of Europa.

Thick or Thin Ice Shell on Europa?
Jupiter's Europa harbors an ocean twice the size of all Earth's oceans combined.

Europa: Water World Infographic
Jupiter's moon Europa may have an ocean more than twice the size of Earth's oceans combined. Why do scientists think so? Find out in 60 seconds.

Space Shorts: Could Jupiter's Moon Europa Have an Ocean?
In this movie Europa is seen in a cutaway view through two cycles of its 3.5 day orbit about the giant planet Jupiter.

Water Vapor Plumes Over Europa
Does life exist beyond Earth? Ocean worlds like Europa could be habitable and possibly even inhabited.

Searching for Life on Jupiter's Moon Europa
This animation showing a flyover of the region named Conamara on Europa was created using stereo imaging data obtained by NASA's Galileo spacecraft.

Ridged Plains Flyover
NASA hosted a Science Chat May 14 to discuss the latest analysis of Jupiter’s moon Europa and its status as one of the most promising places in the solar system to search for life.

NASA Hosts Live Science Chat about Europa Findings
Imagination is our window into the future. This whimsical travel poster imagines future explorers living and working in the ocean beneath Europa's icy crust.

Thrace Macula Flyover
Artist’s illustration of Jupiter and Europa (in the foreground) with the Galileo spacecraft after its pass through a plume erupting from Europa’s surface.

Europa Scene: Plume, Galileo, Magnetic Field
Reanalysis of old data data suggests that the Galileo spacecraft, on its closest flyby of Europa, flew through a plume.

Cilix Crater Flyover
Could a liquid water ocean beneath the surface of Jupiter's moon Europa have the ingredients to support life? Here's how NASA's mission to Europa would find out.

Alien Ocean: NASA's Mission to Europa
Where's a great place to look for life in our solar system beyond Earth? Jupiter's moon, Europa, with its salty, global ocean, might be a good place to start.

Possible Spectroscopy Results of Europa Using Webb
Scientists think there is an ocean within Jupiter's moon Europa. NASA-JPL astrobiologist Kevin Hand explains why scientists are so excited about the potential of this ice-covered world to answer on...