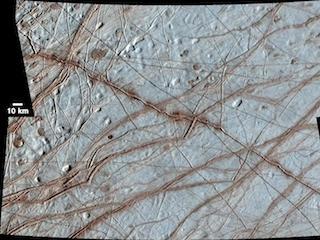 This artist's rendering shows NASA's Europa Clipper spacecraft, which is being developed for a launch sometime in the 2020s. This view shows the spacecraft configuration, which could change before launch, as of early 2016.

The mission would place a spacecraft in orbit around Jupiter in order to perform a detailed investigation of the giant planet's moon Europa -- a world that shows strong evidence for an ocean of liquid water beneath its icy crust and which could host conditions favorable for life. The highly capable, radiation-tolerant spacecraft would enter into a long, looping orbit around Jupiter to perform repeated close flybys of Europa.

The concept image shows two large solar arrays extending from the sides of the spacecraft, to which the mission's ice-penetrating radar antennas are attached. A saucer-shaped high-gain antenna is also side mounted, with a magnetometer boom placed next to it. On the forward end of the spacecraft (at left in this view) is a remote-sensing palette, which houses the rest of the science instrument payload.

The nominal mission would perform at least 45 flybys of Europa at altitudes varying from 1,700 miles to 16 miles (2,700 kilometers to 25 kilometers) above the surface.

This view takes artistic liberty with Jupiter's position in the sky relative to Europa and the spacecraft.

High Resolution Globe of Jupiter
This image of Jupiter's icy satellite Europa shows surface features such as domes and ridges, as well as a region of disrupted terrain including crustal plates which are thought to have broken apar...

Near-Infrared Mapping Coverage of Europa
This color image of the Jovian moon Europa was acquired by Voyager 2 during its close encounter on Monday morning, July 9, 1979.

Europa During Voyager 2 Closest Approach
This 12-frame mosaic provides the highest resolution view ever obtained of the side of Jupiter's moon Europa that faces the giant planet.

New Horizons Spies Europa
Jupiter and its four planet-size moons, called the Galilean satellites, were photographed in early March 1979 by Voyager 1 and assembled into this collage.

Thera and Thrace Macula on Europa
This enhanced color image shows cracks and ridges on Europa's surface that reveal a detailed geologic history.

Thera and Thrace on Europa
The icy surface of Europa, one of the moons of Jupiter, was photographed by the Galileo spacecraft on its fourth orbit around Jupiter.

Flows on Europa
The top image is a very high resolution view of the Conamara Chaos region on Jupiter's moon Europa, showing an area where icy plates have been broken apart and moved around laterally. The bottom im...

Ridges, Plains and Mountains
This composite view taken by NASA's Galileo spacecraft shows the rim and interior of the impact crater, Mannann'an, on Jupiter's moon, Europa.

Mannann'an Crater
This composite image of Europa shows the distribution of ice and minerals for the structure named Tyre.

Europa's Pwyll Crater
This view of the icy surface of Jupiter's moon, Europa, is a mosaic of two pictures taken by the Solid State Imaging system on board the Galileo spacecraft during a close flyby of Europa on Feb. 20...

Mosaic of Europa's Ridges, Craters
These images show a comparison of the surfaces of the three icy Galilean satellites, Europa, Ganymede, and Callisto.

Europa, Ganymede, and Callisto: Surface Comparison at High Spatial Resolution
This is a composite of two images of Jupiter's icy moon Europa obtained from a range of 2,119 miles (3,410 kilometers) by the Galileo spacecraft during its fourth orbit around Jupiter and its first...

Two Moons Meet over Jupiter
This impact scar on Europa is about the size of the island of Hawaii.

Ancient Impact Basin on Europa
Ridges disrupted by the localized formation of domes may be indicative of thermal upwelling of water from beneath Europa's crust.

Dome-Shaped Features on Europa
A series of five images that compare terrain on Europa to the San Francisco Bay area in Calfornia for scale.